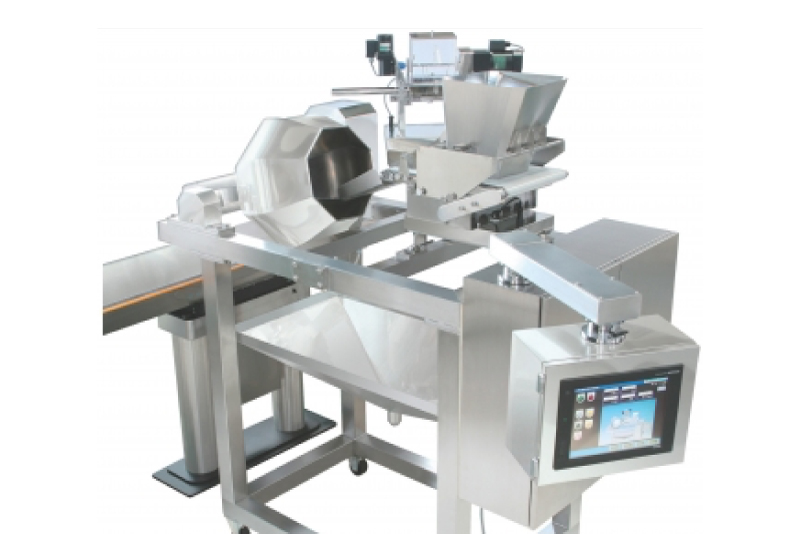 It is a unit to add and stir the amount of flavoring material specified to semi-finished products such as food, confectionery, pet food. Semi-finished products measured by the belt scale can be mixed in the tumbler with flavor materials from the applicator during weighing. The addition time and the mixing time can be set freely with the touch panel, and can correspond to seasoning such as all foods and confectionery.
■ High precision weighing
By static weighing of semi-finished products on the weighing conveyor realized 10 times higher accuracy than conventional continuous type!
→ Drastic improvement of product quality

■ Automatic ratio control
Reduced losses by weighing the flavor material at a preset ratio to the weighed semi-finished product while weighing it.
→Reduction of raw material cost

■One-touch disassembly
Since all units can be disassembled without tools, increased operator efficiency three times.
→Improvement of maintainability

■ Easy operation
Anyone can set the feed with the touch panel easily, such as flavor recipe. →Significant reduction of defective products

About 100 years of trust and achievements! YAMATO SCALE, a specialized manufacturer of scales
More News
This website uses cookies to improve the convenience of the site. See the cookie policy for details.
In addition, by continuing to use the site, you consent to the use of cookies.