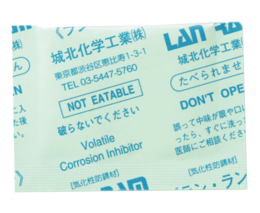 VCI (Volatile Corrosion Inhibitor) is a rust inhibitor that evaporates at room temperature like a pesticide･naphthalene can be used at home, and creates a film on the surface of metal to prevent rust. VCI has been studied since during the war, and there is a history that the US military focusing on its excellent effect has used it for military metal products such as rockets, hydraulic equipment, and furthermore weapons.
1. In addition to iron, SUS, cast iron, it is also effective for non-metals such as copper.
2. There is a fast-acting, and long term rust prevention effect.
3. Easy to handle as well.
4. By vaporization gas, and rust prevention to detailed work.
5. Repeatedly usable.
6. Compared to oil and grease, it is beautiful in appearance.
7. Contributing fact to keeping cost down and is environmentally friendly.

Products Categories
Environmental equipment・Filter
Tool manufacturing facilities
Measurement and inspection equipment
Peripherals / Others
News Categories
Feature
METALEX
This website uses cookies to improve the convenience of the site. See the cookie policy for details.
In addition, by continuing to use the site, you consent to the use of cookies.